to save money and streamline business processes. 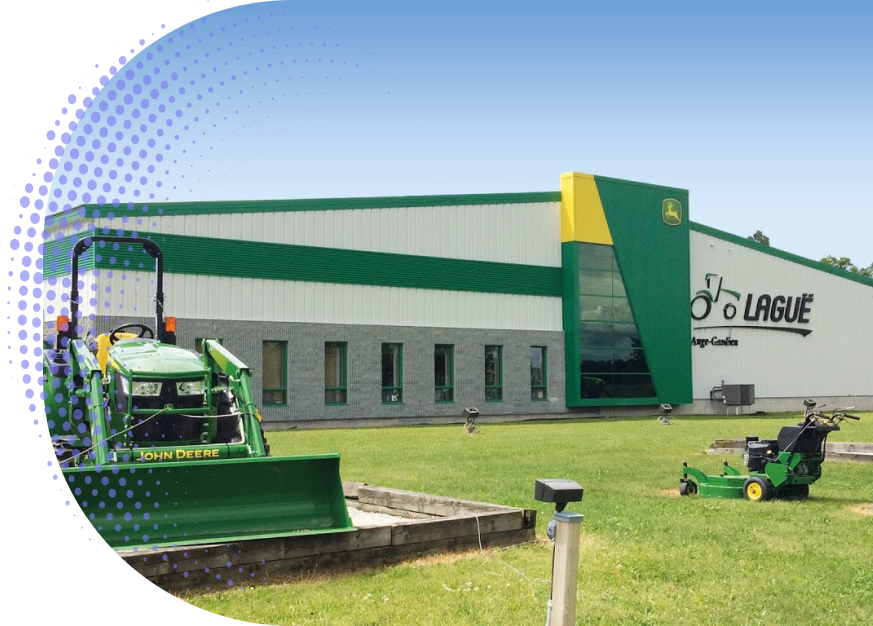 As one of Canada’s largest John Deere dealers, JLD-Laguë offers agricultural equipment and service at 16 locations across Quebec & Eastern Ontario.  With 46 years in the industry, JLD-Laguë’s continued success is attributed to the company's dedication to providing quality service to every customer. Finding innovative solutions to improve products via technological developments is a quest shared by JLD-Laguë’s over 400 employees and is what keeps customers returning to a location for parts, service and/or new equipment season after season.

In early 2016, JLD-Laguë’s small but nimble technology team was facing the resource intensive task of upgrading a hosted exchange server. In parallel with this upgrade, the team would also be managing the many technical hurdles associated with onboarding two newly acquired locations.  As apart of onboarding, the team was intrigued to learn that the two new locations were using Google Workspace as their productivity technology. As the IT Team was open to a less expensive alternative to upgrading the server; it seemed that the introduction of Google Workspace was perfectly timed.

In addition to debating a pricey upgrade, the technology team was also interested in finding a productivity solution that better supported the expanding business’ need for tools that promoted communication and collaboration. Michel Lemieux, the company’s Director of IT, looked to technology to find a solution that would solve both issues. He was also concerned with finding a comprehensive tool that would be easy to implement and to use. With a mixed staff comprised of office workers, mechanics and customer service providers, email, calendars, document & file storage needed to “just work” without hindering productivity.

After comparing costs, the price of Google Workspace was found to be half the cost of their legacy system. Additionally, it ticked all the requirements outlined by the technology team not to mention the favorable reviews from the staff of the two locations already using the technology in their day to day. A Go-Live date was scheduled, and a Google Cloud Premier Partner identified. JLD-Laguë partnered with Suitebriar who guided the migration and currently provides ongoing technical support. “Our Suitebriar representative was available when we needed him and when it didn't go as planned he found a solution and get it implemented right away (Saturday evening) to make sure we had limited impact on our operations,” stated Lemieux.

As with any technological implementation, some challenges are to be expected. “Initially we treated the implementation as a simple email migration, but it was more than that,” stated Lemieux. “Although Google Workspace is easy to use, transitioning productivity platforms is still a change, and change needs to be managed” which the JLD-Laguë’s Technology Team admittedly underestimated.

Because of that, initial adoption rates suffered. “We needed to take a step back and recognize the implementation for what it was. It was a change to how people work, and no matter how simple a tool is to use, it is still a change.” To realign adoption rates, Lemieux’s team offered hour and a half onsite trainings at each location along with providing additional training videos and documentation.  “My advice for any business: Don’t underestimate change management,” advises Lemieux. “Any business planning a Google Workspace deployment should strongly consider onsite and/or webinar trainings prior to the migrations.”

Concerned with adoption rates moving forward, the company initially intended to keep dual licenses of the legacy system and Google Workspace to ensure vital work processes weren’t jeopardized with the deployment. They also would maintain a few legacy licenses for power excel users. However, after the onsite trainings, they rethought their process. “Aside from the initial hiccup, overall adoption by the staff went far more quickly than expected” stated Lemieux. “Because it's [Google Workspace] so easy to use people transitioned seamlessly and were excited to begin collaborating once they saw the potential.”

Now two years after their initial deployment, JLD-Laguë’s distributed workforce has fully embraced Google Workspace. The Accounting Department, in particular, has benefited tremendously from the transition. “Initially our Chief Accountant was very reluctant to use Sheets,” shares Lemieux.  “Once we worked through her challenges and I showed her the automation capabilities and benefits, she started to enjoy using Google Workspace.”

By utilizing custom development services offered by Suitebriar along with Google Apps Script and the simple Share functionality intrinsic to Sheets, Lemieux was able to consolidate as well as automate the company’s monthly expense reports. Now the once time-consuming data entry required from each location is convenient, and accounting has instant visibility into the financial position of each location as well as the company as a whole. “Our Chief Accountant is thrilled with how quickly staff now completes and returns expense reports,” stated Lemieux.  “Staff submits expenses online via Google Forms. Accounting just sends out the link. Anything painful about that process has been removed.”

Similar workflow improvements have been facilitated in other departments as a result of the implementation. The HR department uses Forms to collect Paid Time Off requests and uses Sheets to manage timesheets. They no longer have to send documents back and forth. Onboarding new employees is also a streamlined event as all documentation is available in Drive with clear guidelines as to who does what during the process.

JLD-Laguë also utilizes Google Sites as an intranet. Each department has their own section which they can easily maintain. The Site is perfect for Customer Service and Maintenance staff as they can access company documents and equipment catalogs at any time, from any device.

As is often the case in small technology departments, JLD-Laguë’s department acts not only as IT for the business but also, technology equipment and help desk managers. With Google Workspace they no longer have to deal with the licensing nightmare associated with their legacy system and prepping laptops for new employees is far less time consuming as Google Workspace is accessed via a shortcut. The team also spends less time managing helpdesk requests related to documents and emails since the migration. According to Lemieux, JLD-Laguë will continue to take advantage of the automation capabilities available with Google Workspace and plan to further improve their Accounting process with the launch of a new App scheduled for 2018.